It is with a heavy heart that Carol Fosse, Ray Fosse’s wife of 51 years, shares the sad news that Ray Fosse lost his battle to cancer on October 13, 2021 after silently fighting it for the past 16 years. Carol and daughters, Nikki and Lindsey, send their love out to family, friends and fans that mourn his loss with them.

The Great Love Story of Ray and Carol Fosse

As Told By Lindsey, Ray and Carol Fosse's youngest daughter

Ray Fosse was a devoted man. First and foremost, Ray Fosse was devoted to God, to his wife, to his children and to his grandchildren. Ray met his wife Carol when he was just 19 years old playing for the Reno Silver Socks. “May I carry your peaches up for you?” Ray asked one day. Carol’s Mother and Father had sent a crate of fresh peaches from Tracy, California. They were heavy and Carol lived on the second floor. This was just one of many offers Ray had attempted in order to talk to Carol. Carol finally agreed. He carried them upstairs and proceeded to eat nearly all of them. It was in those moments that their sweetness of love began. Ray and Carol went their separate ways at the end of the summer, Ray to serve in the National Guard, attend Southern Illinois University and play in the Minor Leagues, while Carol completed college at University Nevada Reno, went into the airlines, flew the troops into Vietnam and taught seventh grade when she returned. Yet, true love will always find a way. Four years later, Ray and Carol’s paths crossed again when his team was playing the Angels and she was teaching school in Manhattan Beach. This time, they didn’t wait. On Ray’s birthday, April 4th, 1970, Ray and Carol were married in front of family and friends in the very city where they first met.

Ray and Carol Fosse had a beautiful life filled with travel and adventures you only read about in fairytales. When Ray and Carol got married, Ray was playing for the Cleveland Indians and Carol was teaching in Manhattan Beach, California. The Manager of the Cleveland Indians, Alvin Dark, understood the importance of true love. “Ray, if your new bride Carol isn’t on that plane, you will be fined $100.” (and that was a lot of money in 1970!) Carol left sunny California to warm her heart as a new bride in Cleveland, Ohio with Ray Fosse by her side. Cameras swarmed the terminal to snap a photo of Ray and Carol as they got off the plane. Carol was a beam of sunlight with her beautiful golden hair and her gorgeous smile. Ray’s proud smile lit up the entire room, as he thought, “my beautiful wife,” a term he would repeat everyday as the years went by. The newspaper captured the beginning of Ray and Carol’s 51 year baseball love story, and Hal Lebowitz, called it “The Great Love Story.”

Ray and Carol had a whirlwind adventure in Cleveland. As a star player for the Indians, all eyes were on the couple and the newlyweds were treated like Cleveland Royalty. On July 14, 1970, Carol was in the bleachers at the All Star game, when she saw the medical team rush to the field. “Who is hurt?” she asked. It was her husband Ray. The world focused on the famous play, but Carol was focused on just one thing, the love of her life, Ray.

In the midst of all the baseball glory, Carol was also by Ray’s side during all of the injuries that came with the territory. From broken fingers and shattered discs, to knee injuries and more, Carol nursed Ray back to health with love and support.

During their newlywed years, Ray and Carol went on more travel adventures than one could count. From golf tournaments in Puerto Rico, to winter baseball in Venezuela, Ray and Carol lived life to the fullest. In 1973, Ray was traded to the Oakland Athletics, just 45 minutes from the orchards where Carol grew up. This meant that family would be by their side when they welcomed their first daughter Nikki on September 24, 1975 - the same day they clinched the Western Division!  Ray and Carol’s love story continued as they welcomed a second daughter Lindsey to their family on October 8, 1982. For the next 39 years, God and family was the main focus for Ray and Carol as they raised two wonderful daughters, who eventually welcomed two boys and two girls of their own and made Ray and Carol into a very proud Nonnie and Papa.

Ray and Carol loved to travel and did so any chance they got. On off days, Ray and Carol would go on a day adventures up the coast to have lunch along the water, explore towns, missions and the history of California, all while enjoying each other’s company. During the off season, they traveled the world! God always came first to the couple and they had a lifelong dream of traveling to Fatima. This dream came true. The couple also traveled to Rome to experience the Vatican and their Catholic history as well. For their entire 51 year marriage, Carol traveled with Ray to every city in the Nation during the season. Boston and New York topped the list of their favorite cities to explore. They especially loved to visit Catholic Cathedrals in every city, with St. Patrick’s topping the list.  Ray and Carol had a beautiful life blessed with health, happiness, family and fun, all thanks to the grace from God. Ray and Carol would attend mass with their family and found such joy in watching their Grandchildren grow. From holidays to birthdays, and every activity in between, Ray and Carol would travel far and wide to never miss a moment in their grandchildren’s lives.

On October 13, 2021, Ray Fosse had to leave his bride, who was by his side until his very last breath. Ray loved his bride for 51 years and their love story is one that will never be forgotten. 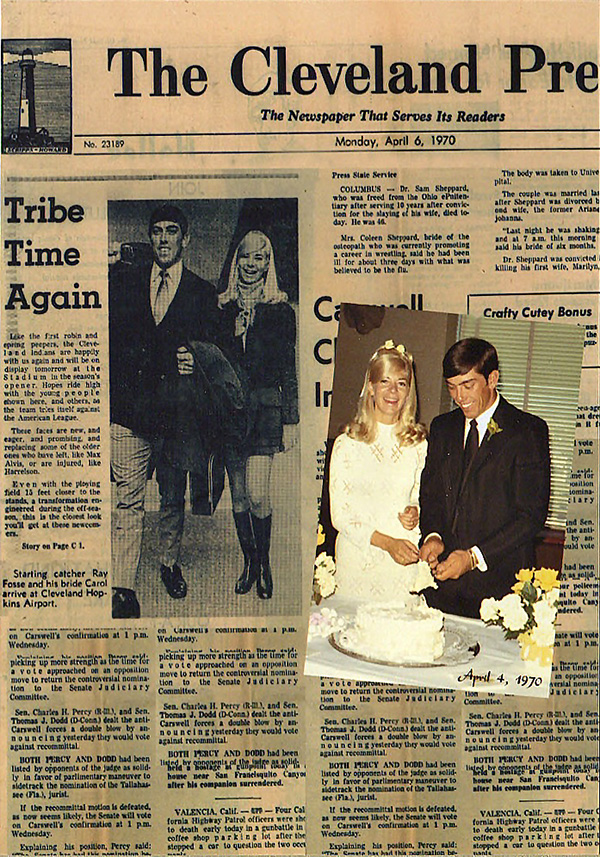